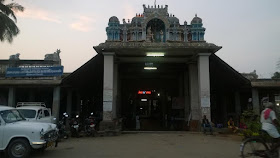 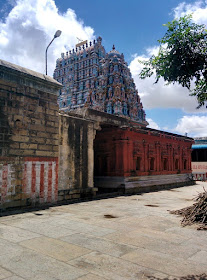 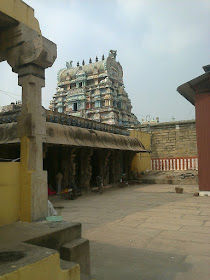 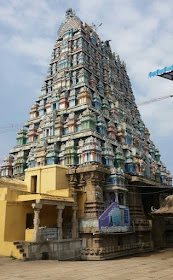 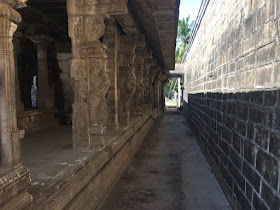 While Shiva temples are generally facing east, Avudaiyarkoil temple is facing south.  As Lord Shiva plays the Guru part teaching Saint Manikkavasakar as Lord Dakshinamurthy, the temple is facing south, it is explained.  The other Shiva temple facing south is Lord Kadambavana Nathar temple in Karur. Surprisingly, the temple does not have Nandi, flagstaff, Balipeedam and Somaskandar is conspicuously absent as both Lord and Mother are formless. And instead of playing Nadaswaram, Melam and Berigai, the blowing of conch, ringing of bell and Thiruchinnam is in vogue. 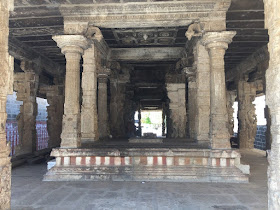 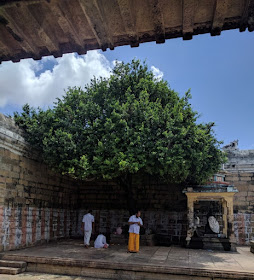 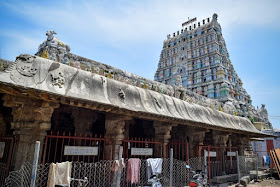 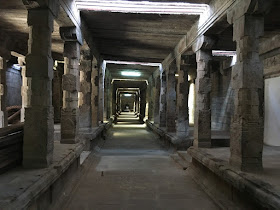 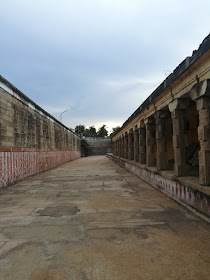 Contrary to traditional absence of pujas in temples during eclipse time, it is otherwise in Avudaiyarkoil temple conducting the six-time puja as usual even during such occurrence.  The philosophy is that eclipses cannot stop the pujas for Shiva having no beginning nor an end – no Aadhi – no Andham. Manickavasagar wrote Thiruvasagam, one of the sacred books of Tamil Saiva Siddhanta, in this Temple. This Temple is considered as one of the Thiruvasaga Sthalams. 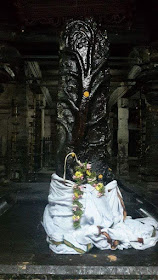 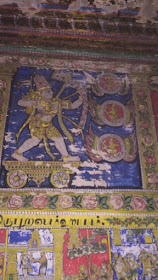 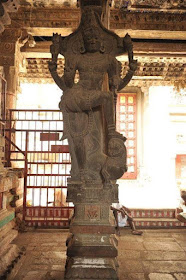 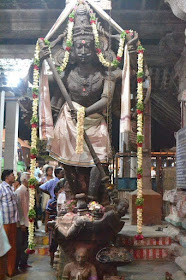 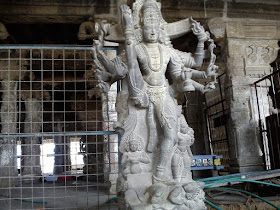 Legends
For brief details, please refer below link;
https://tamilnadu-favtourism.blogspot.com/2019/11/athmanatha-swamy-temple-avudaiyarkoil-legends.html
History
For brief details, please refer below link;
https://tamilnadu-favtourism.blogspot.com/2019/11/athmanatha-swamy-temple-avudaiyarkoil-history.html
The Temple
For brief details, please refer below link;
https://tamilnadu-favtourism.blogspot.com/2019/11/athmanatha-swamy-temple-avudaiyarkoil-temple.html
Temple Opening Time
The temple remains open from 06.00 a.m. to 12.00 Noon and from 04.00 p.m. to 09.00 p.m.
Festivals
The annual festivals celebrated here are 10 days Aani Thirumanjanam and 10 days Margazhi Thiruvadhirai as in Chidambaram Nataraja Temple. In both the above festivals, Saint Manikkavasakar occupies all prominence. This is not just a festival for a Shiva devotee but is considered as one for Lord Shiva as Manikkavasakar is respected as Lord Shiva himself.
The last Monday of Karthikai month is very special, so Fridays in Aadi-July-August and Thai month – January-February. Special pujas are offered to Lord on Aani Magam star day in June-July, Shivrathri in February-March, Panguni Uthiram in March-April, Skanda Sashti in October-November, Tirukarthikai in November-December, Navaratri in September-October and Avani Moolam in August-September.
Religious Significance
For brief details, please refer below link;
https://tamilnadu-favtourism.blogspot.com/2019/11/athmanatha-swamy-temple-avudaiyarkoil-religious-significance.html
Prayers
As this is the sacred place where Lord Shiva himself was the Guru –Teacher   of Saint Manikkavasakar, devotees pray here for progress in education and high academic pursuits.  The beneficial power of Jupiter – Guru further adds to their development. People also pray for wedding and Child boons too. Boiled rice with its steaming condition is offered as nivedhana to Lord along with other preparations Thaen Kuzhal and Adhirasam, Appam & Vadai and with Arati. Usual abishek and aaradhanas are also offered. Some arrange Annadhanam. Devotees offer liberally for the renovation of the temple.
Contact
Athmanatha Swami Temple,
Avudaiyarkoil, Aranthangi,
Pudukkottai District – 614 618
Phone: +91 4371 233 301
Mobile: +91 98947 31606 / 91598 54014 / 91598 53680
Connectivity
The Temple is located at about 100 meters from Avudaiyar Koil Bus Stop, 14 Kms from Aranthangi, 15 Kms from Aranthangi Railway Station, 23 Kms from Mimisal, 36 Kms from Pudukkottai, 95 Kms from Trichy Airport, 105 Kms from Trichy, 129 Kms from Madurai and 135 Kms from Madurai Airport. The Temple is situated on Aranthangi to Mimisal Route. There are various bus operators providing bus service to Avudaiyarkoil from all major places in Tamil Nadu.
Avudaiyar Koil is well connected by bus service from Pudukottai and Aranthangi. The devotee has to reach Aranthangi from Pudukkottai. Bus facilities are available conveniently from Aranthangi to Avudaiyarkoil. Trains / Buses can be taken to Trichy and regular buses are available from Trichy. Nearest Railway Station is located at Aranthangi and Nearest Airport is located at Trichy.
Location | Photos
Ilamurugan at 10:45 PM
Share
‹
›
Home
View web version