Thirumalapuram Rock Cut Cave Temple, Thirunelveli
Thirumalapuram Rock Cut Cave Temples is located in Sankarankoil Taluk in Thirunelveli District of Tamilnadu. The rock cut cave temples are situated on the hill of Thirumalapuram also known as Varanasimalai. These ancient Cave temples are now under the protection of Archaeological Survey of India. Archaeological evidence is available to prove that people lived here even 10,000 years ago. Neolithic tools excavated from this area bear witness to this fact. There are two rock-cut temples. The one in the south bears an incomplete look. It is also called as Pasupathynatheswarar Cave Temple. The northern temple houses a Shivalinga, hewn out of the rock. 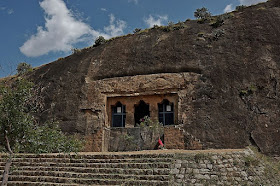 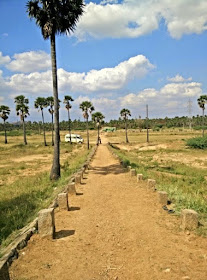 From the lingam it is evident that regular abishekam was performed in ancient days. The temple also houses the idols of Brahma, Nataraja, Vishnu and Vinayaka, which are slightly damaged. From the architecture of the temple and special features of the images, it can be concluded that the temple must have been hewn by the Pandyas in the 7th century. Southern Temple is unfinished rock cut cave on the other side of the hillock which is not under worship. There is an 11th century inscription on one of the pillars. The Nandi in the front mandapam is in a dilapidated condition and the murals inside the temple also look faded. 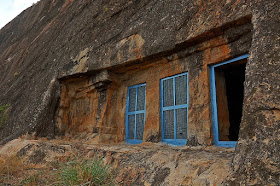 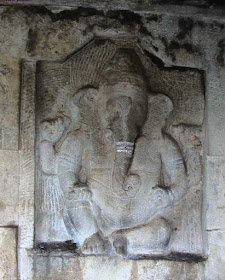 History
The date for this cave is assigned to the second half of the seventh Century A.D. and of Pandya style based on the architecture of the cave and from the images displaying few unique features. This is ascertained by the monolithic Shivalinga - carved out of the base rock, a feature which is not present in the Pallava caves of the same period and the presence of Pillaiyar bas relief. The site is a centrally protected monument under the control of Archaeological Survey of India since 1922.
Cave Temple
There are two rock cut cave temples which are excavated by Pandyan Kings in 750 AD. Among the two caves one is finished and other is unfinished. The finished one is more significant with rectangular ardha-mandapa with a flight of steps and cells on the western walls. It contains bas-relief sculptures and two inscriptions from Pandyan period. This temple has 3 sections with 3 bas-relief structures. The first one is a beautiful dancing Siva with a bhootha gana and bull on both sides. Lord Shiva is seen in dancing posture of Chatura. 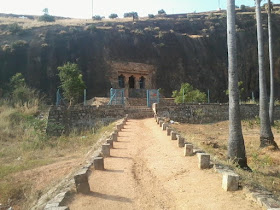 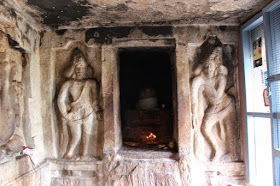 A dwarf near his foot plays the musical instrument. Second carving is a standing Lord Vishnu with 4 hands and 2 seated bhootha ganas on either sides with sankha and chakra on upper two hands. Seated Ganesha is seen next to him. On one side is the sanctum sanctorum with a Siva Lingam. On either sides of the entrance of sanctum sanctorum are Dwarapalakas. There is another relief sculpture of Brahma with 4 hands and 3 visible heads. On the centre of the hall, facing the Siva Linga is a monolith Nandi which is in broken state. These figures in these temples are excellent examples of Pandyan art. 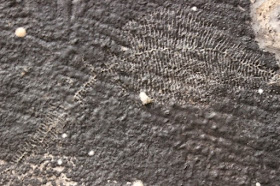 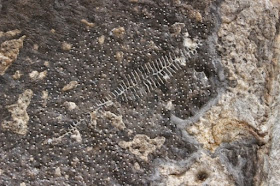 The Façade:
The facade of the rock cut cave abuts the mukha mandapa and measures about 0.90 meters in width in east-west direction and 5.49 meters in length in north-south direction. The mother rock extends from the facade as side walls, floor and cornice. The facade has two pillars in the middle and two pilasters on both ends. The pillars are in usual early rock-cut cave style, cubical top and bottom (Brahma kanta) with intermediate octagonal shaft (Vishnu kanta). 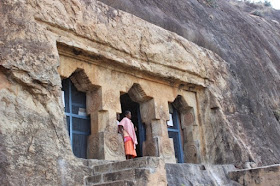 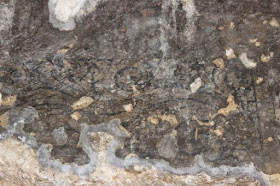 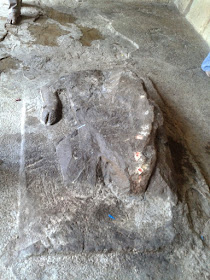 The potikas hold the uttira and above it vajana is running throughout the kapota and extends to the lateral walls, pilasters and extends up to the floor. Above vajana the continuous band of valabi shown. The cornices appear irregularly shaped and the long groove running across the entire length of the facade serves to drain the rain water. The eastern lateral wall measures about 0.64 meters in width and western lateral wall measures about 1.70 meters in width. The floors of the facade and mukha mandapa are evenly leveled. 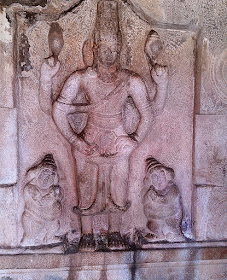 Mukha Mandapam:
The rectangular mukha mandapa measures 5.91 meters in north-south and 3.13 meters in east-west directions. There is one niche on the eastern wall and three niches on the southern walls. A koshta, measuring about 1.96 meters in height and 1.00 meters in width, at the centre of the eastern wall bears the bas relief image of Lord Brahma appear in standing posture. His right arm rests on his hip and the left arm holds the dried bottle gourd. The right rear arm holds flower and the left arm holds the palm-leaf manuscript. The deity wears jatamakuta, sacred thread (Yagyopavitam), sarapuli, udharabandha, keyura (tollvalai), thick bangles and the deity also wears a silk dhoti in pancha-kacha style. 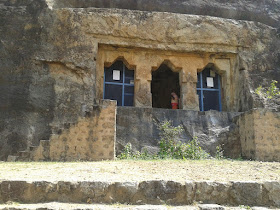 Koshtas:
The southern wall has three koshtas: The first koshta at southern wall, measuring about 1.86 meters in length, 1.41 meters in width bears the unique dancing bas relief image of Lord Shiva and there are two Buta Ganas standing one on each side. The four armed Lord Shiva appears in chatura-tandavam posture (the 107th dance posture in the 108 dance postures of Shiva) with the left foot slightly raised into the air and the right foot firmly placed on the floor. 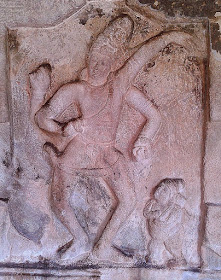 The rear right hand holds the flower; the front right hand is holding the yajnopavita; the front left hand is extended above the shoulder (ardhapataka); and the rear left carries the palm-leaf manuscript. Braided locks are hanging at the back. The hair is dressed high in jatamukuta and bears a crescent moon to the proper left and the skull. He wears a palm-leaf coil as ear-ring at his right ear lobe and the left ear lobe appears long and empty. He also wears yajnopavita, necklace, udara-bandha, serpentine spiral armlets, forearm band and anklets. 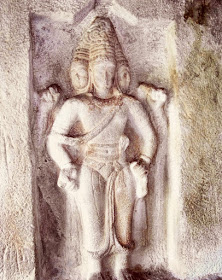 The costume consists of short garment worn around the waist with an elaborate girdle decorated with a floral clasp in front. A thin sash runs around his waist. A serpent coils around the waist and thighs. The image, unique piece of its kind, is a very fine example of the early Pandya art. The gana at the right side of the Lord exhibits the legs and other organs are mostly destroyed. The gana at right wears karanta makutam (head gear) and palm leaf coil at ear-lobe appears standing and playing the sirattai kinnari (traditional Tamil musical instrument) with right hand. 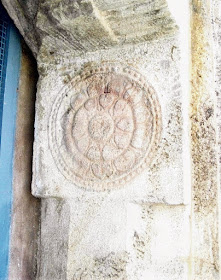 The second koshta at the southern wall, measuring about 1.90 meters in height and 1.40 meters in width, bears four armed Lord Vishnu in standing posture and there are two Buta Ganas standing one on each side. The rear right hand holds the conch; the rear left hand carries the discuss wheel; the front left is resting on the waist; and the front right hand displays the palm around the waist. The costume consists of full length golden silk garment, Pitambara as it is called around the waist in pancha kacha style. 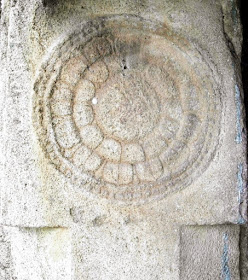 He is adorned with ornaments like krita makutam with wheel, makara kundala on ear lobes, sarapali, armlets, fore-arm band, udhara bandha, and yajnopavita,  The Buta ganas (slightly destroyed) are wearing karanta makutam, palm leaf coil and short loin, and showing their faces towards audience and yet appear worshiping the Lord. 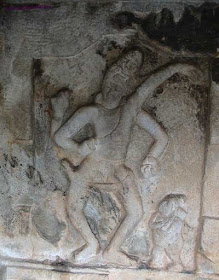 The third koshta at the southern wall, measuring about 1.68 meters in height and 1.34 meters in width, bears idampuri Pillaiyar appear in maharajaleelasanam. The rear right hand holds the pasa; the rear left carries the tusk; the front left is resting on the belly; and the front right hand resting on the knee and holding the modhakam. He is adorned with ornaments like karanta makutam, armlets, fore-arm band, udhara bandha, and yajnopavita. The costume consists of small garment around the waist. 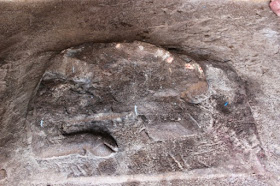 At the centre of the mukha mandapa floor a monolithic Nandhi appear in a ruined state. Traces of early Pandya paintings are seen along prastara. The rectangular Avudayar measures about 1.22 meters in width and 1.32 meters in length and to a height of 0.63 meters and the plinth of the Avudayar is formed as a padabandha adhishthana with the elements of upana, jagati, vritta kumuda,  kantha with pada and flanked by kampa, pattika and upari kampa. The rock cut Vesara bana is 0.54 meters height. The second cave is incomplete and located at the southern face of the hill. 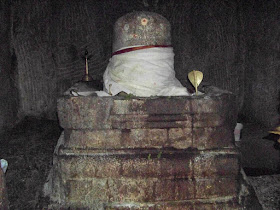 Inscriptions:
There is one inscription found on one of the pillars has been assigned to 11th century A.D. Another inscription (dilapidated) of Pandya King Vallaba Devan (1090-1116 A.D.) noticed on the eastern side of the mukha mandapam records about the gifts including fertile lands with trees, deep wells and tanks to this temple by the king. Reports the royal order issued to the village Sabha of Viranarayanamangalam in Thukavur kutram and the nattar of Varanavasipuram. A family from Kadampankulam is said to come to the temple every year on Thirukarthigai day and light a deepam with castor oil on a stone pit meant for the purpose. 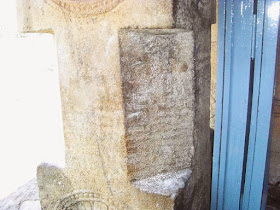 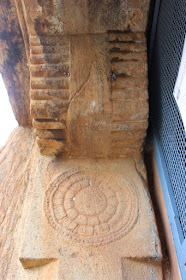